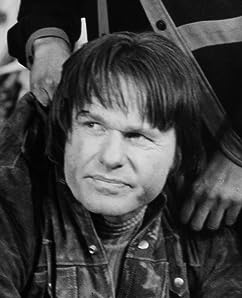 Bill McKinney, the movie and television character actor who was one of the great on-screen villains, was born in Chattanooga, Tennessee on September 12, 1931. He had an unsettled life as a child, moving 12 times before joining the Navy at the age of 19 during the Korean War. Once, when his family moved from Tennessee to Georgia, he was beaten by a local gang and thrown into a creek for the offense of being from the Volunteer State.In his four years on active duty in the Navy, McKinney served two years on a mine sweeper in Korean waters. He was also stationed at Port Hueneme in Ventura County, California, and he would journey to nearby Los Angeles while on liberty from his ship. During his years in the Navy, McKinney decided he wanted to be an actor and would make it his life if he survived the Korean War.Discharged in Long Beach, California, in 1954, McKinney settled in southern California. He attended acting school at the famous Pasadena Playhouse in 1957, and his classmates included Dustin Hoffman and Mako. McKinney supported himself as an arborist, trimming and taking down trees, a job he continued into the 1970s, when he was appearing in major films. McKinney has had a life-long love affair with trees since he was a child.After his time at the Pasadena Playhouse, McKinney was admitted to Lee Strasberg's Actors Studio. He made his movie debut in the exploitation picture, She Freak (1967), and was busy on television, making his debut in 1968 on Die Monkees (1966) and attracting attention as "Lobo" on Alias Smith & Jones (1971). But it was as the Mountain Man in John Boorman's Beim Sterben ist jeder der Erste (1972), a movie nominated for Best Picture of 1972 at the Academy Awards, that brought McKinney widespread attention and solidified his reputation as one of moviedom's all-time most heinous screen villains.In his autobiography, McKinney's Beim Sterben ist jeder der Erste (1972) co-star, Burt Reynolds (whose character dispatches The Mountain Man with an arrow in the back) said of McKinney, "I thought he was a little bent. I used to get up at five in the morning and see him running nude through the golf course while the sprinklers watered the grass...."McKinney denies this, and also disputes Reynolds contention that he was overly enthusiastic playing the infamous scene where his character buggers Ned Beatty."He always played sickos", Reynolds said of McKinney, "but he played them well. With my dark sense of humor, I was kind of amused by him.... McKinney turned out to be a pretty good guy who just took the method way too far".McKinney told Maxim magazine in an interview honoring him and his Mountain Man partner 'Herbert "Cowboy" Coward' as the #1 screen villains of all time that Reynolds' stories were untrue. "If you lose control on a movie set", McKinney told Maxim, "it's not acting, it's indulgence".McKinney's wild-and-reckless screen persona and penchant for on-screen villainy attracted offers from A-list directors, which is a testament to his professionalism. He began appearing in films directed by top directors: Sam Peckinpah's Junior Bonner (1972), John Huston's Das war Roy Bean (1972), Peter Yates's Bei mir liegst du richtig (1974) and, most chillingly, as the assassin in Alan J. Pakula's Zeuge einer Verschwörung (1974). (One director who did not hire him was Stanley Kubrick, who had considered him for the role of the Marine drill instructor in Full Metal Jacket (1987) but demurred as he thought he came across as too scary after screening "Deliverance".)McKinney also appeared in the classic TV movie, The Execution of Private Slovik (1974), while guest-starring on some of the top TV shows, including Baretta: He'll Never See Daylight (1975) and Columbo (1971).It was on the set working for a new director, who would go on to win an Oscar that McKinney made a fateful connection. He played the aptly named "Crazy Driver" in Michael Cimino's Die Letzten beißen die Hunde (1974), starring Clint Eastwood. McKinney became part of the Eastwood stock company and enjoyed one of his best roles as the commander of the Red Legs in Der Texaner (1976), under the direction of Eastwood, himself. McKinney appeared in another six Eastwood films from Der Mann, der niemals aufgibt (1977) to Pink Cadillac (1989), when the Eastwood stock company disbanded, and had another terrific turn in Eastwood's well-reviewed Bronco Billy (1980), this time playing a member of Bronco Billy's circus, a character that was neither crazy, demented or odd.Der Texaner (1976), which Orson Welles praised as an extremely well-directed film at a time when respectable critics did not associate Clint Eastwood with art, let alone craftsmanship, and Bronco Billy (1980), which was a hit with the critics but not with Eastwood fans, established the laconic superstar's reputation as a director, and McKinney was in both films. In the mid-'70s, McKinney also was a memorable misanthrope as 'Ron Howard''s employer who is done in by John Wayne's Der Scharfschütze (1976) in the eponymous film directed by Don Siegel, Eastwood's mentor. Other memorable movies that McKinney has appeared in during his career include the initial Rambo film, Rambo (1982), Gegen jede Chance (1984), ...und wenn der letzte Reifen platzt (1983), Zurück in die Zukunft III (1990) and The Green Mile (1999).He never retired, continuing to act into his late seventies. He also performed as a singer and recorded a CD, "Love Songs from Antry", featuring Sinatra-like numbers and some country & western tunes.Bill McKinney died on December 1, 2011 in Van Nuys, California from cancer of the esophagus. He was 80 years old. - IMDb Mini Biography By: Jon C. Hopwood

Amazon Video has the most number of Bill McKinney’s flixes, followed by DIRECTV compared to other streaming platforms. See the full graph below.

On average the IMDB score of the movies that Bill McKinney has worked on is 6.8.

A veteran Green Beret is forced by a cruel Sheriff and his deputies to flee into the mountains and wage an escalating one-man war against his pursuers.

After their mother dies and their father leaves them, teenage brothers Tex and Mason McCormick struggle to make it on their own.

Racing across the country from L.A. to New York, a plethora of exotic cars carry contestants hoping to win a very large sum.