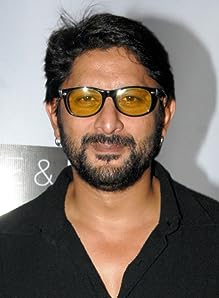 Arshad Warsi was born in Mumbai, India, and did his schooling at a boarding school, Barnes School, Deolali in Nashik district, Maharashtra. He was orphaned at the age of 14 and struggled for a living in Mumbai during his early days.Financial circumstances forced Warsi to start work as a door-to-door cosmetics salesman at age 17. Later he worked in a photo lab. Meanwhile he had a keen interest in dancing and received an offer to join Akbar Sami's Dance group in Mumbai, which started his dancing and choreographing career. He also assisted Mahesh Bhatt in Thikana (1987) and Kaash (1987). Then in 1991, he won the Indian dance competition, followed by the fourth prize in the Modern Jazz category in 1992 World Dance championship, London, at the age of 21. Soon, he started his own dance studio, 'Awesome' with that money and also formed a dance troupe. It was here, his future wife, Maria Goretti, a St. Andrew's College student joined him, before she became a VJ. He was also associated with English theater group in Mumbai, choreographing shows for Bharat Dabholkar and got an opportunity to choreograph the title track for the film, Roop Ki Rani Choron Ka Raja (1993). - IMDb Mini Biography By: Tariq I. Samy

Amazon Video has the most number of Arshad Warsi’s flixes, followed by Amazon Prime Video compared to other streaming platforms. See the full graph below.

On average the IMDB score of the movies that Arshad Warsi has worked on is 5.2.

A gangster sets out to fulfill his father's dream of becoming a doctor.

Munna Bhai embarks on a journey with Mahatma Gandhi in order to fight against a corrupt property dealer.

A small time lawyer files a PIL in court against his own idols case.

Four lazy slacker conmen buddies who are jobless, homeless and broke learn about the secret of a hidden treasure from a dying thief and later embark on a race against time to find the mobster's buried treasure and claim it while being pursued by a determined police inspector who is hellbent to get the treasure all by himself.

Four runaway crooks take shelter in a bungalow which is owned by a blind couple.

While on the run from goons, a man and his nephew fall for a kidnapper's seductive widow.

A thrilling story spanning 48 hours of five individuals linked by hate and fear but brought together by fate to finally recognize each other.