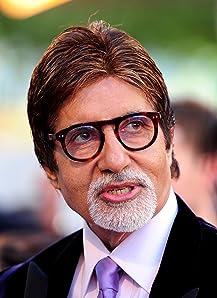 Son of well known poet Harivansh Rai Bachchan and Teji Bachchan. He has a brother named Ajitabh. He completed his education from Uttar Pradesh and moved to Bombay to find work as a film star, in vain though, as film-makers preferred someone with a fairer skin, and he was not quite fair enough. But they did use one of his other assets, his deep baritone voice, which was used for narration and background commentary. He was successful in being cast in Saat Hindustani. He got his break in Bollywood after a letter of introduction from the then Prime Minister Mrs. Indira Gandhi, as he was a friend of her son, Rajiv Gandhi. This is how Amitabh made an entry in Bollywood, starting with Zanjeer, co-starred with his future wife Jaya Bhaduri, and since then there has been no looking back.He married Jaya Bhaduri, an accomplished actress in her own right, and they had two children, Shweta and Abhishek. Shweta is married, lives a non-filmy life and has two children.Being friends with Rajiv Gandhi, got him to decide to run for seat in the Congress from his hometown but had to leave midterm because of controversies, particularly after Rajiv and he were implicated in the now infamous "Bofors" case along with the U.K. based Hinduja Brothers.After a four year break, he was back in the unsuccessful Mrityudaata (1997), a comeback which the actor wanted to forget. Critics written him off but his career was saved with Bade Miyan Chote Miyan (1998). But four flops in 1999 and incurring debt of over 90 Crores rupees of his sinking company ABCL saw him at an all-time low. To make matters worse, after the defeat of the Congress party, Amitabh lost considerable political support, the opposition made him a target, and his credit rating deteriorated to such an extent that a leading nationalized bank, Canara Bank, sued him for outstanding loans. He did bounce back, presenting the Indian version of Who Wants To Be A Millionaire called Kaun Banega Crorepati? (2000). After a series of hits with Denn meine Liebe ist unsterblich (2000), In guten wie in schweren Tagen (2001) and Baghban - Und am Abend wartet das Glück (2003) and Khakee - Das tödliche Gesetz Indiens (2004), this elderly Bachchan is showing no signs of slowing down and proving the critics wrong once again.His son, Abhishek, is also an actor by his own rights.Amitabh and Jaya were interested in getting Abhishek married to Karishma, the daughter of Babita and Randhir Kapoor, they went through a formal engagement, but later broke it off.The former Miss World and Bollywood actress, Aishwarya Rai, and Abhishek, were formally engaged on Sunday January 14, 2007, at the Bachchan residence in Juhu, Bombay, with the marriage taking place at the Bachchan residence on April 20, 2007.On November 16, 2011, he became a Dada (Paternal Grandfather) when Aishwarya gave birth to a daughter in Mumbai Hospital. He is already a Nana (maternal grandfather) to Navya Naveli and Agastye - Shweta's children.He continues to be one of the busiest actors and singers in Bollywood as well as on TV, as can be seen from the commercials that he appears on, especially on Sahara One. Looks like there are no limits for this super-star and once the "Angry Young Man" of Bollywood. - IMDb Mini Biography By: rAjOo

Amazon Video has the most number of Amitabh Bachchan’s flixes, followed by Amazon Prime Video compared to other streaming platforms. See the full graph below.

On average the IMDB score of the movies that Amitabh Bachchan has worked on is 6.2.

A newly wedded husband plays a practical joke on his wife's family with full support from his wife and friends.

When three young women are implicated in a crime, a retired lawyer steps forward to help them clear their names.

After his family is murdered by a notorious and ruthless bandit, a former police officer enlists the services of two outlaws to capture the bandit.

The story of a terminally ill man who wishes to live life to the fullest before the inevitable occurs, as told by his best friend.

A dynamic young entrepreneur finds herself locked in a hotel room with the corpse of her dead lover. She hires a prestigious lawyer to defend her and they work together to figure out what actually happened.

An aimless, jobless, irresponsible grown man joins the army and matures into a battlefield hero.

A popular singer convinces his new wife to enter show-business, but his pride is wounded when she outshines him.

Don, a wanted criminal, dies in a police chase. DSP D'Silva is the only one who knows about his death, and to get hold of the gang he trains Don-lookalike Vijay. But Vijay faces danger from the police and from within the gang.