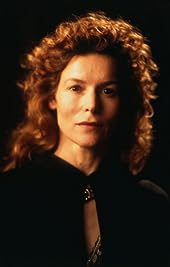 Alice Maud Krige was born on June 28, 1954 in Upington, South Africa where her father, Dr. Louis Krige, worked as a young physician. The Kriges later moved to Port Elizabeth where Alice grew up in what she describes as a "very happy family", a family that also included two brothers (both of whom became physicians) and her mother, Pat, a clinical psychologist. Interestingly, Alice also grew up without television, something which the actress calls a "huge black hole in my education" (South Africa did not start getting television until 1976, a year after Alice left the country to pursue an acting career in London).While growing up, she had no dreams or aspirations of pursuing an acting career, in fact as a child she had wanted to become a dancer, but her father disapproved. Instead, she prepared to follow in the footsteps of her mother by attending Rhodes University in Grahamstown where she pursued an undergraduate degree in psychology and literature (graduating in 1975). However, as luck or fate would have it, Alice decided to "take up a bit of timetable" by enrolling in a drama class in order to make use of a free credit. This decision would prove to be a life-altering one, resulting in an honors degree in drama from Rhodes, a move to London and a new career path. As Alice explains, "I really got into it and it took over my life... it became my life-calling, all consuming."After arriving in England, she began three years of study at London's Central School of Speech and Drama. Her first professional acting performance was a tiny television role in a 1979 BBC Play for Today. In 1980, Alice made her feature film debut as Sybil Gordon in the Academy Award winning Best Picture, Chariots of Fire (1981). She then appeared in the television adaptation of Charles Dickens' A Tale of Two Cities (1980), which was followed by her memorable, dual role as the avenging spirit in Ghost Story (1981). Also in 1981, she debuted in a West End theatre production of Bernard Shaw's Arms and the Man, for which she received the honors of both a Plays and Players Award and a Laurence Olivier Award for Most Promising Newcomer. It was this early success in theatre that she decided to focus her career on next by spending some time working with the prestigious Royal Shakespeare Company.During her two seasons with the RSC (1982-83), Alice performed in such productions as "King Lear", "The Tempest", "The Taming of the Shrew" and "Cyrano de Bergerac". After her stint with the Royal Shakespeare Company, she returned to work in film and television. Her career could best be described as an eclectic mix of both mediums. She appeared in a diverse range of films, such as King David (1985), Barfly (1987), Haunted Summer (1988), Spies Inc. (1992) and See You in the Morning (1989). Her work in television included critically acclaimed miniseries, such as Ellis Island (1984) and Wallenberg: A Hero's Story (1985), as well as a healthy dose of what Alice herself calls, "kitchen sink dramas".This eclectic trend continued into the 1990s. In addition to numerous roles in television (including appearances on Beverly Hills, 90210 (1990) and Becker (1998), Alice also appeared in the films Sleepwalkers (1992), Institute Benjamenta, or This Dream That One Calls Human Life (1995), Donor Unknown (1995), Amanda (1996), Twilight of the Ice Nymphs (1997), Habitat (1997), The Commissioner (1998) and Molokai (1999). However, one notable standout was the film Star Trek: First Contact (1996) for which she won a 1997 Saturn Award for her portrayal of the Borg Queen. This is without a doubt the most commercial, mainstream film with which she has been involved. However, due to the amount of make-up and prosthetics that the role required, Alice claims that even today she is still most recognized from her role in Ghost Story (1981).One obvious and lasting impact of her experience with Star Trek: First Contact has been her initiation into the world of Star Trek/sci-fi conventions. These weekend-long conventions take place all over the United States and Europe (primarily in the United Kingdom and Germany). They feature "guests", such as Alice, who give presentations, sign autographs, etc. The new millennium finds her with several new projects to her credit, which include such works as The Little Vampire (2000), the Star Trek: Voyager (1995) series finale "Endgame", Attila (2001), Dinotopia (2002), Reign of Fire (2002), Children of Dune (2003), The Mystery of Natalie Wood (2004) and a recurring guest role in the HBO series Deadwood (2004). Current projects include a film about the life of Julius Caesar, the horror film Silent Hill (2006), Lonely Hearts (2006) and The Contract (2006). In addition, she continues to make sporadic convention appearances and was recently awarded an honorary doctorate in literature from Rhodes University.Alice Krige is married to writer/director Paul Schoolman, and lives what she describes as an "itinerant" lifestyle. Although she and her husband maintain a permanent home in the United States, they spend much of their time living and working abroad. - IMDb Mini Biography By: www.krige-page.com

Amazon Video has the most number of Alice Krige’s flixes, followed by Vudu compared to other streaming platforms. See the full graph below.

On average the IMDB score of the movies that Alice Krige has worked on is 6.4.

Having gone missing seven years ago, the previously blind Prairie returns home, now in her twenties with her sight restored. While many believe she is a miracle, others worry that she could be dangerous.

The Biblical story of Joseph, who was sold to slavery by his brothers who were jealous of his prophetic abilities to analyze dreams and of his being their fathers' favorite.

The early life of Roman ruler Julius Caesar as told in three working prisons in South Africa, the U.K., and Canada. A small group of professional actors is joined by hundreds of prisoners to tell the story of one of history's foremost personalities.

Anne was in love with Frederick, who was rejected by her snobby parents 8 years ago. They've now hit hard times and rent out their mansion to his brother-in-law. He returns a Royal Navy captain. Will he remember Anne?

The twins of Paul "Muad'dib" Atreides become embroiled in the political landscape of Arrakis ("Dune") and the rest of the universe.

Drama
Institute Benjamenta, or This Dream That One Calls Human Life (1995)

A young man goes to a school for servants run by a brother and sister. In the dreamlike and surreal world that he enters, how will his presence impact the people there and possibly even the school itself?

Based on the true story of a black girl who was born to two white Afrikaner parents in South Africa during the apartheid era.

Biography,Drama,Mystery
The Mystery of Natalie Wood (2004)

Uses accounts from family, friends, and acquaintances to tell the story of Natalie Wood and how she started young, acting in the spotlight, making the transition from a childhood actress to...