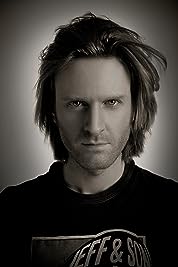 Alexx O'Nell (born Alexander Leonard O'Neill) is an American-born actor and musician who is based in India and has appeared in films and television programs in English and Indian languages. His major feature films include "Main Aur Charles", "Cheeni Kum", "Madrasapattinam", "Joker", "Chittagong" and "Urumi" (Ek Yodha Shoorveer) and he is additionally known for his Video On Demand titles "21 Sarfarosh" (Netfix), "Bose" (Balaji Alt), "Inside Edge" (Amazon Prime). In addition to acting, he is a singer, guitarist, and songwriter.O'Nell has performed in dozens of commercials and has endorsed products like Captain Morgan (Asia), Mouin Glaciere (Perfume, MENA), etc.The third child of an American father and a Dutch mother, O'Nell grew up in Madison, Connecticut and began his acting career with community and regional theater in the United States. He starred in over a dozen musicals and plays over a span of 10 years, later working in television advertisements in India and internationally, finally landing character roles and appearances in such films as the Hindi feature "Cheeni Kum" (2007) and the English feature "Loins of Punjab Presents" (2007). He later gained recognition as a contestant on the hugely popular Indian celebrity dance competition "Nach Baliye" (Season 3, 2007) before landing more significant, and finally, lead roles in various film and television projects.Following a high-profile relationship with Indian actress Sweta Keswani, O'Nell and Keswani were married in October and November 2008 in four different ceremonies. They lived together in Mumbai, India until their separation in mid-2011.O'Nell attended Boston University, graduating after 3 years with a B.A. in Philosophy and a B.A. in Psychology.O'Nell's first leading role in a big-budget production came alongside Amy Jackson and Arya in "Madrasapattinam" (2010), following which O'Nell returned to television to star in the Indian prime time historical drama "Jhansi Ki Rani" (2010) and the contemporary drama "Dhoondh Legi Manzil Humein" (2011). Late 2011 saw the release of the Hindi language feature "Jo Dooba So Paar" (2011) with O'Nell in a supporting role alongside Vinay Pathak, after which he was seen in a lead role in Shirish Kunder's "Joker" (2012) with Akshay Kumar and Sonakshi Sinha. Bedabrata Pain's much-awaited "Chittagong" (2012), with Nawazuddin, Barry John, Raj Kumar and others, released to overwhelming critical acclaim as did one of his most significant roles to date, a double-lead role in the multilingual "Urumi" (2011), steered by acclaimed Indian director Santosh Sivan, also starring Genelia D'Souza, Prabhudeva, and Vidya Balan. "Gangster" and "Manglish" (2014) both featuring O'Nell alongside South-Indian superstar Mammootty, cemented his position in Malayalam cinema. He enjoyed his most significant critical acclaim for his performance in director Prawaal Raman's "Main Aur Charles" (2015) with Randeep Hooda and Richa Chadha; and was most recently seen in "Ek Yodha Shoorveer" (2016), a Hindi dubbed and re-edited version of "Urumi" (2011), as well as Alexander the Great in Balaji Telefilms' "Chandra Nandni" (2016), before returning to work exclusively in film for 8 more titles from 2016 on. - IMDb Mini Biography By: Amazon Video X-Ray

Amazon Prime Video has the most number of Alexx O'Nell’s flixes, followed by Apple iTunes compared to other streaming platforms. See the full graph below.

On average the IMDB score of the movies that Alexx O'Nell has worked on is 6.0.

A chronicle of the lives and events that led to the brave and epic last stand of the 21 soldiers of the 36th Sikh regiment of the British Indian Army against thousands of Afghani invaders in the September of 1897.

After escaping from prison, a notorious serial killer and conman becomes the target of a nationwide manhunt led by an honest police officer determined to catch him.

Akbar is a powerful figure of Mangalore underworld who shares his business lead with Mani Menon and Uncle Sam , two other prominent gangsters ruling the city. The city remains calm under ...