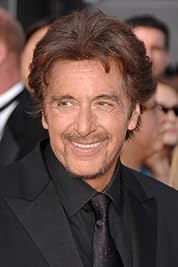 Alfredo James "Al" 'Pacino established himself as a film actor during one of cinema's most vibrant decades, the 1970s, and has become an enduring and iconic figure in the world of American movies.He was born April 25, 1940 in Manhattan, New York City, to Italian-American parents, Rose (nee Gerardi) and Sal Pacino. They divorced when he was young. His mother moved them into his grandparents' home in the South Bronx. Pacino found himself often repeating the plots and voices of characters he had seen in the movies. Bored and unmotivated in school, he found a haven in school plays, and his interest soon blossomed into a full-time career. Starting onstage, he went through a period of depression and poverty, sometimes having to borrow bus fare to succeed to auditions. He made it into the prestigious Actors Studio in 1966, studying under Lee Strasberg, creator of the Method Approach that would become the trademark of many 1970s-era actors.After appearing in a string of plays in supporting roles, Pacino finally attained success off-Broadway with Israel Horovitz's "The Indian Wants the Bronx", winning an Obie Award for the 1966-67 season. That was followed by a Tony Award for "Does the Tiger Wear a Necktie?" His first feature films made little departure from the gritty realistic stage performances that earned him respect: he played a drug addict in Pánik a Tű parkban (1971) after his film debut in Én, Natali (1969). The role of Michael Corleone in A keresztapa (1972) was one of the most sought-after of the time: Robert Redford, Warren Beatty, Jack Nicholson, Ryan O'Neal, Robert De Niro and a host of other actors either wanted it or were mentioned, but director Francis Ford Coppola wanted Pacino for the role.Coppola was successful but Pacino was reportedly in constant fear of being fired during the very difficult shoot. The film was a monster hit that earned Pacino his first Academy Award nomination for Best Supporting Actor. However, instead of taking on easier projects for the big money he could now command, Pacino threw his support behind what he considered tough but important films, such as the true-life crime drama Serpico (1973) and the tragic real-life bank robbery film Kánikulai délután (1975). He was nominated three consecutive years for the "Best Actor" Academy Award. He faltered slightly with Bobby Deerfield (1977), but regained his stride with Az igazság mindenkié (1979), for which he received another Academy Award nomination for Best Actor. Unfortunately, this would signal the beginning of a decline in his career, which produced flops like Portyán (1980) and Szerző! Szerző! (1982).Pacino took on another vicious gangster role and cemented his legendary status in the ultra-violent cult film A sebhelyesarcú (1983), but a monumental mistake was about to follow. Amerika fegyverben (1985) endured an endless and seemingly cursed shoot in which equipment was destroyed, weather was terrible, and Pacino fell ill with pneumonia. Constant changes in the script further derailed the project. The Revolutionary War-themed film, considered among the worst films ever made, resulted in awful reviews and kept him off the screen for the next four years. Returning to the stage, Pacino did much to give back and contribute to the theatre, which he considers his first love. He directed a film, A helyi stigma (1990), but it remains unreleased. He lifted his self-imposed exile with the striking A szerelem tengere (1989) as a hard-drinking policeman. This marked the second phase of Pacino's career, being the first to feature his now famous dark, owl eyes and hoarse, gravelly voice.Returning to the Corleones, Pacino made A keresztapa III. (1990) and earned raves for his first comedic role in the colorful adaptation Dick Tracy (1990). This earned him another Academy Award nomination for Best Supporting Actor, and two years later he was nominated for Glengarry Glen Ross (1992). He went into romantic mode for Krumplirózsa (1991). In 1992, he finally won the Academy Award for Best Actor for his amazing performance in Egy asszony illata (1992). A mixture of technical perfection (he plays a blind man) and charisma, the role was tailor-made for him, and remains a classic.The next few years would see Pacino becoming more comfortable with acting and movies as a business, turning out great roles in great films with more frequency and less of the demanding personal involvement of his wilder days. Carlito útja (1993) proved another gangster classic, as did the epic crime drama Szemtől szemben (1995) directed by Michael Mann and co-starring Robert De Niro. He directed the film adaptation of Shakespeare's Richard nyomában (1996). During this period, Minden gyanú felett (1996), Fedőneve: Donnie Brasco (1997) and Az ördög ügyvédje (1997) all came out. Reteaming with Mann and then Oliver Stone, he gave commanding performances in A bennfentes (1999) and Minden héten háború (1999).In the 2000s, Pacino starred in a number of theatrical blockbusters, including Ocean's Thirteen - A játszma folytatódik (2007), but his choice in television roles (the vicious, closeted Roy Cohn in the HBO miniseries Angyalok Amerikában (2003) and his sensitive portrayal of Jack Kevorkian, in the television movie Dr. Halál (2010)) are reminiscent of the bolder choices of his early career. Each television project garnered him an Emmy Award for Outstanding Lead Actor in a Miniseries or a Movie.Never wed, Pacino has a daughter, Julie Marie, with acting teacher Jan Tarrant, and a set of twins with former longtime girlfriend Beverly D'Angelo. His romantic history includes Jill Clayburgh, Veruschka von Lehndorff, Carole Mallory, Debra Winger, Tuesday Weld, Marthe Keller, Carmen Cervera, Kathleen Quinlan, Lyndall Hobbs, Penelope Ann Miller, and a two-decade intermittent relationship with "Godfather" co-star Diane Keaton. He currently lives with Argentinian actress Lucila Solá, who is 36 years his junior. - IMDb Mini Biography By: Pedro Borges

Amazon Video has the most number of Al Pacino’s flixes, followed by Google Play Movies compared to other streaming platforms. See the full graph below.

On average the IMDB score of the movies that Al Pacino has worked on is 6.9.

The aging patriarch of an organized crime dynasty transfers control of his clandestine empire to his reluctant son.

A group of professional bank robbers start to feel the heat from police when they unknowingly leave a clue at their latest heist.

In 1980 Miami, a determined Cuban immigrant takes over a drug cartel and succumbs to greed.

A prep school student needing money agrees to "babysit" a blind man, but the job is not at all what he anticipated.

A man robs a bank to pay for his lover's operation, which turns into a hostage situation and a media circus.

A Puerto Rican former convict, just released from prison, pledges to stay away from drugs and violence despite the pressure around him and lead on to a better life outside of N.Y.C.