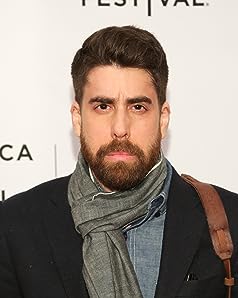 An actor with a talent for mining the neuroses of his characters for both comedic and dramatic effect and a filmmaker adept at exploring the philosophical questions at the heart of the human experience, Adam Goldberg has solidified his position as a versatile and unique talent.Goldberg was born in Santa Monica, California, to Donna (Goebel) and Earl Goldberg. His father is of Ashkenazi Jewish descent (from Russia, Lithuania, and Romania), while Adam's mother is a lapsed Catholic who has German, Mexican, Irish, French, and English ancestry.Goldberg made his feature film debut in 1991 as Billy Crystal's younger brother-in-law in Mr. Saturday Night (1992). Additional film credits include Steven Spielberg's Saving Private Ryan (1998) with Tom Hanks, Ron Howard's Edtv (1999), Richard Linklater's ode to 1970s high school life, Dazed and Confused (1993) as well as Waking Life (2001), John Singleton's Higher Learning (1995), Gregory Widen's The Prophecy (1995) opposite Christopher Walken, and lent his voice to George Miller's Babe: Pig in the City (1998).A familiar presence on television, Goldberg's TV credits include Marcus Nispel's made-for-television film Frankenstein (2004) opposite Parker Posey, guest-starring appearances on Law & Order: Criminal Intent (2001), The Practice (1997), Will & Grace (1998), and a popular recurring role on Friends (1994). Additional credits include The Outer Limits (1995), ER (1994), and NYPD Blue (1993).Goldberg also appeared on the big screen in Donald Petrie's How to Lose a Guy in 10 Days (2003) with Matthew McConaughey and Kate Hudson, Jonathan Kesselman's send-up The Hebrew Hammer (2003), D.J. Caruso's drug noir The Salton Sea (2002) with Val Kilmer, and Ron Howard's Academy Award-winning film A Beautiful Mind (2001) with Russell Crowe.Goldberg co-wrote and directed the feature I Love Your Work (2003), which was produced through his production company. The film, starring Giovanni Ribisi, Franka Potente, Christina Ricci and Joshua Jackson, with a cameo by Elvis Costello, is about the gradual meltdown of a fictional movie star. Goldberg also composed the film's original music with The Flaming Lips' drummer Steven Drozd.Goldberg starred in FOX's comedy, Head Cases (2005) as Shultz, a lawyer suffering from a explosive disorder who insinuates himself into the life of a fellow lawyer (played by Chris O'Donnell) recovering from a nervous breakdown. The two eventually join forces to start a law firm both to take on the cases of underdog clients who need their help, but just as importantly to try to keep each other sane.As a filmmaker, Goldberg wrote, directed and starred in the "neo-noir", Scotch and Milk (1998), which made its debut in 1998 at the Los Angeles Independent Film Festival, and was featured on the Sundance Channel series "10 Best Films You May Never Seen." In addition, Goldberg directed, co-edited, and produced the comic documentary short, Running with the Bulls (2003) for the Independent Film Channel. - IMDb Mini Biography By: his publicist.

Amazon Video has the most number of Adam Goldberg’s flixes, followed by Google Play Movies compared to other streaming platforms. See the full graph below.

On average the IMDB score of the movies that Adam Goldberg has worked on is 6.2.

Darkly comedic drama focusing on the dysfunctional cops and staff of an infamous NYPD precinct.

Comedy about a husband and wife trying to raise their five kids in a New York City two-bedroom apartment.

After a tragic incident, a man drifts into a world populated by thugs and speed junkies.

Marion and Jack try to rekindle their relationship with a visit to Paris, home of Marion's parents -- and several of her ex-boyfriends.

Our collective nightmare mythologies are rooted in real-life horror stories.

As former CIA agent Bryan Mills deals with a personal tragedy that shakes his world, he fights to overcome the incident and exact revenge.

Benjamin Barry is an advertising executive and ladies' man who, to win a big campaign, bets that he can make a woman fall in love with him in 10 days. Andie Anderson covers the "How To" beat for "Composure" magazine and is assigned to write an article on "How to Lose a Guy in 10 days." They meet in a bar shortly after the bet is made.

"All Over The Guy" is a contemporary romantic comedy about the quest to find the "one" when "the one" doesn't know he's the "one." It explores the unlikely pairing of two 20-somethings ...