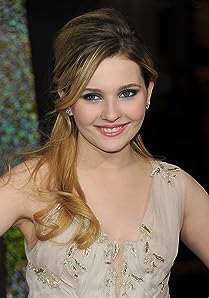 Academy Award-nominated actress Abigail Breslin is one of the most sought-after actors of her generation. Her unique and charismatic talents have contributed to her versatile roles in both comedy and drama.Recently, Breslin headlined the first season of the horror-comedy series, Королеви крику (2015), opposite Emma Roberts, Lea Michele and Jamie Lee Curtis, and starred in the coveted role of "Baby" in ABC/Lionsgate's recreation of the pop-culture classic, Dirty Dancing (2017).Abigail Kathleen Breslin was born in New York City, New York, to Kim and Michael Breslin, a telecommunications expert and consultant. She has two sibling, Ryan Breslin and Spencer Breslin, who is also an actor. She is of Irish, Austrian Jewish, and English descent.Abigial has acted since she was a small child. She is widely recognized for her role in the critically-acclaimed Маленька Міс Щастя (2006), the irreverent, antic comedy which created a sensation at the 2006 Sundance Film Festival, Breslin played the role of "Olive", an ambitious young girl who is obsessed with winning a beauty pageant. For her performance, she received a Best Actress Award from the Tokyo International Film Festival and was nominated for an Academy Award, SAG and BAFTA Best Supporting Actress awards. In addition, she was honored as ShoWest's "Female Star of Tomorrow" in 2008, and made her Broadway debut in 2010 in "The Miracle Worker".Her many credits include Гра Ендера (2013), Лімб (2013), Виклик (2013), Ранго (2011), Janie Jones (2010), Вітаємо у Зомбіленді (2009), Янгол для сестри (2009), Старий Новий рік (2011), Модна матуся (2004), Останній подарунок (2006), Санта Клаус 3 (2006), Смак життя (2007), Так, можливо (2008), Острів Нім (2008), Кіт Кіттрідж: Американська дівчинка (2008) and M. Night Shyamalan's 2002 film, Знаки (2002), opposite Mel Gibson.Breslin was seen in The Weinstein Company film, Серпень: Графство Осейдж (2013), opposite Meryl Streep, Ewan McGregor, Julia Roberts, Sam Shepard, Dermot Mulroney and Juliette Lewis. She starred in the coveted role of "Jean Fordham", the daughter of Julia Roberts' and Ewan McGregor's characters.She starred in the Lionsgate film, Меґґі (2015), opposite Arnold Schwarzenegger. The film follows a teenage girl (Breslin) from a small town in the Midwest, who becomes infected by a disease that slowly turns her into a zombie. The film premiered at the 2015 Tribeca Film Festival in New York and was released on May 8, 2015.In October of 2015, Harper Collins published Breslin's first book, "This May Sound Crazy". The book is based on her popular Tumblr "Mixtapes & Winter Coats", in which she writes honest, funny and emotional observations on her daily life as a young adult. - IMDb Mini Biography By: Tina

Amazon Video has the most number of Abigail Breslin’s flixes, followed by Vudu compared to other streaming platforms. See the full graph below.

On average the IMDB score of the movies that Abigail Breslin has worked on is 6.4.

A shy student trying to reach his family in Ohio, a gun-toting tough guy trying to find the last Twinkie, and a pair of sisters trying to get to an amusement park join forces to travel across a zombie-filled America.

Anna Fitzgerald looks to earn medical emancipation from her parents who until now have relied on their youngest child to help their leukemia-stricken daughter Kate remain alive.

A deceased billionaire leaves his spoiled adult grandson a series of odd tasks to perform in order to receive "the ultimate gift," with the resentful grandson having no idea what that might be.

Rango is an ordinary chameleon who accidentally winds up in the town of Dirt, a lawless outpost in the Wild West in desperate need of a new sheriff.

A semi-anthology series that centers on characters being terrorized by a serial killer in different locations, including a university and a hospital.

A political consultant tries to explain his impending divorce and past relationships to his 11-year-old daughter.

Four sets of bakers compete in Christmas themed baking challenges. First round is cupcakes, second round confections, and final round cakes. After each challenge one group is eliminated and the winner of the final challenge gets $10,000.