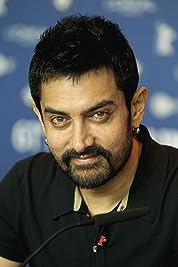 Aamir is doubtless one of the most dedicated actors in this world. With his recent successes in both the Indian and Chinese markets he has shouldered his way into becoming one of the world's biggest superstars. Undergoing rapid transformations in his body structure to better embody the variegated characters in his energetic films, Aamir has garnered praise from all parts of the globe. His most visible transformations can be seen in such movies as Ghajini, 3 idiots, Talaash, Dhoom 3, PK and Dangal. His recent successes with movies like Dangal, PK , Talaash and TV serial Satyamev Jayate have attracted attention from more serious moviegoing crowds. However, he is perhaps better known for his fabulous comedic roles, as exemplified by his iconic performances in cult comedies such as Andaz Apna Apna, Passion, and Dil Chahta Hai, to name a few. Aamir is also no slouch at TV commercial work.2001's Lagaan released in China nationwide, beginning what would be a series of Aamir Khan films that would firmly plant Indian filmmaking into the minds of Chinese audiences. 3 Idiots became a cult hit in China farther along in the 2000's, followed by Like Stars on Earth and Ghajini, both of which went on to gain huge followings. Aamir Khan's streak of Chinese box office hits continued into and throughout the 2010's with the rapid-fire release of Dhoom 3 (2013), PK (2014), Dangal (2016) and Secret Superstar (2017).Aamir was first introduced as a child artist in the 1970's hit Yaadon Ki Baaraat (1973) - he was the youngest child in the trio.His performance in Earth (1998) as the Ice-Candy man has received rave reviews from Indian and international critics. Using classic "method acting" and an adopted technique inspired by his seniors Sanjeev Kumar, Rajesh Khanna, Dev Anand and Shammi Kapoor, Aamir acts in all genres of Indian films - comedy, action, drama and romance. He is regarded as a complete Indian actor of the post 1990 generation of actors for his diverse choice of roles and films. In 2007 he turned director with the film Taare Zameen Par (2007), which not only brought him immense critical acclaim but was also a huge box office success. Many of his films are considered as cult classics like Lagaan (2001), Dil Chahta Hai (2001), Rang De Basanti (2006), Jo Jeeta Wohi Sikandar (1992) and Andaz Apna Apna (1994). He divorced his first wife in December 2001 and married Kiran Rao in December 2005.In 2008 his first all out commercial action film Ghajini (2008) went on to become the highest grossing film of its time in Indian Cinema and 4th highest inflation adjusted, grossing a total of Rs.226 on the worldwide box office and the first film to cross 100 crores on the domestic Indian box office, making a total of Rs.115 crores. This record didn't last long, though, since his next release 3 Idiots (2009) went on to shatter not only the highest grosser record but many more. It not only made the highest opening first day, first weekend and first week records but subsequently continued to shatter many records on the following weekends and weeks, making many circuits on the way. It made a total of Rs.202 crores domestically and Rs.400 crores on the worldwide box office, becoming the highest overseas grosser to date, a staggering feat given that no other film had even come close to making Rs.100 crores on the domestic box office until then, except for his own Ghajini (2008) the previous year.Aamir is said to be the actor who first started the trend of actors working in one film at a time, when the others worked in four or five at the same time. He is also known to shun popular film trade magazine awards like Filmfare, Star Screen, etc. as he doesn't have trust in their credibility and transparency. Recently he was awarded the third highest civilian honor Padama Bhushan by the government of India.Aamir's expansive range of characterizations remains unparalleled amongst his contemporaries. Because of this diversity and his formidable ability to portray different characters believably on screen, he is today regarded not only as one of the biggest stars in Bollywood but also as one of the finest actors in all of Indian Cinema. - IMDb Mini Biography By: apmisy1325@hotmail.com and Liam Wilhelm

Amazon Video has the most number of Aamir Khan’s flixes, followed by Netflix compared to other streaming platforms. See the full graph below.

On average the IMDB score of the movies that Aamir Khan has worked on is 7.0.

The movie traces three real-life incidents that took place in '80s, 90s and 2000s respectively through the stories titled 'Orphan and the Convict', 'The Farmer and the Nun' and 'The Terror and the Mom'.

Two friends are searching for their long lost companion. They revisit their college days and recall the memories of their friend who inspired them to think differently, even as the rest of the world called them "idiots".

An account of the making of the Lagaan, by director Satyajit Bhatkal, who served as a production assistant on the film.

Former wrestler Mahavir Singh Phogat and his two wrestler daughters struggle towards glory at the Commonwealth Games in the face of societal oppression.

An eight-year-old boy is thought to be a lazy trouble-maker, until the new art teacher has the patience and compassion to discover the real problem behind his struggles in school.

An alien on Earth loses the only device he can use to communicate with his spaceship. His innocent nature and child-like questions force the country to evaluate the impact of religion on its people.

The story of six young Indians who assist an English woman to film a documentary on the freedom fighters from their past, and the events that lead them to relive the long-forgotten saga of freedom.